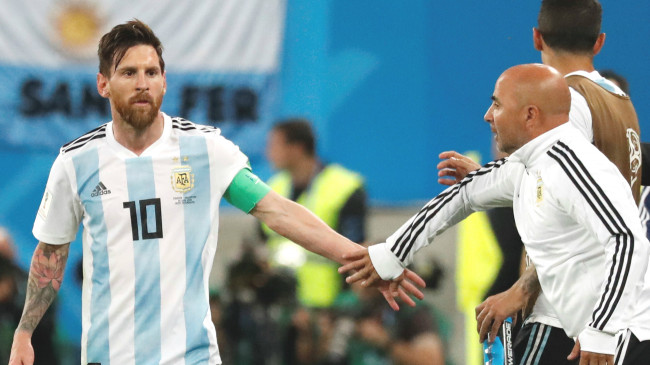 Argentina coach Jorge Sampaoli had words of praise for all his players but especially for his captain and star man Lionel Messi after their victory against Nigeria which ensured that the Albiceleste avoided an embarrassing Group Stage exit.

The coach was relieved after Argentina suffered so much and commented that the match against Croatia did not go according to plan as the team could not bring Messi into the game. The Argentine playmaker has the tendency to ease his way into the game with lots of touches on the ball and his performance was jittery when he did not see much of the ball against Croatia. With Messi seeing less action, chances were not created.

"A coach who has to train Leo knows everybody surrounding him needs to make him feel secure, and if we are able to create passes to Leo we can create chances. Otherwise we suffer.

"We have the best player in the world and the other players need to benefit from that. That's why I said the match against Croatia was our problem, not his problem."

Sampaoli confessed that Messi’s gesture of coming to hug him made him proud. "When Leo came and hugged me it made me very proud and happy, because he knows I am passionate every single day," Sampaoli said.

"I have had the opportunity to travel with him and share moments with him. He knows me well, and knows we have this dream to come to Russia and do something important for Argentina.

Sampaoli had tried to ensure that Messi gets to have more say in the match. Introduction of a midfielder like Banega helped Argentina build play through midfield with a lot more fluency than in previous matches.

"His position in the team - playing three midfielders and Leo on the right trying to create more passes on the inside to get to the goal on the outside.

He praised Ever Banega, who was instrumental in the first half and then battled through in the second.

"I was pleased with Ever [Banega], Enzo [Perez], Javi [Mascherano] and Leo, they have stopped our opponents creating any transitions.

"We had planned and I think the first half went well. We were better than Nigeria," Sampaoli added. "We were also able to move forward and have many touches in the midfield.

"After the penalty we got nervous and were worried about not going through, but we were very happy at the end.

Lionel Messi is now back in training with the first-team, though he still has some mobility issues, and is thus unlikely to feature in the Copa del Rey clash against Cultural Leonesa.

The Argentine suffered a fracture on his right arm during Barcelona’s 4-2 victory over Sevilla in La Liga and was subsequently ruled out of El Clasico clash against Real Madrid which Barca then won 5-1. Messi seemed super glad to be back in training as can be seen from the photo that FC Barcelona shared on their official Facebook page.

While Barcelona still played at an impressive level without their chief playmaker, coach Ernesto Valverde wanted Messi back as soon as possible.

"For us, since last week when he got injured, we were probably thinking how we would respond on the pitch," he told a news conference.

"There's only one answer, you have to respond as a team and that's what we've done. The result could've been different but that's the only answer we can give you.

"We're delighted for the team but obviously the sooner he's back the better for us because we miss him. We want him back tomorrow,” the coach said after the 5-1 hammering of Real Madrid.

Messi reportedly only underwent light training today and Barcelona will be hoping that the Argentine is available for the match against Atletico Madrid on November 25. Messi is still unlikely to feature against Inter Milan in the Champions League and also any La Liga matches prior to the Atletico match.

After Argentina's terrible start to the World Cup, Barcelona forward Lionel Messi has declared that he is ready to fight in order to qualify for the round of 16 and confirmed that he will not retire without having won the World Cup.

The Argentine captain had previously stated that his generation has a ‘debt to settle’ at the Russia World Cup but after two poor performances on the trot from the Albiceleste, their chances of qualification hangs by a thread and must beat Nigeria and better Iceland’s result by two goals in their final Group D match.

Messi opened up about his dream of winning the World Cup, and was quoted by The Mirror as saying: “It means so much because for Argentina the World Cup is special - and for me too.

“I’ve always had the dream of watching me raise the World Cup. And then seeing the emotion that goes with it,” he said.

Check out: Where is Argentina's focus

Messi, who will be 35 by the time the 2022 Qatar World Cup comes around is hoping to win a World Cup after coming so close in Brazil 2014 where La Albiceleste were defeated in the final by Germany.

“My hair stands on end just thinking about that moment. It would make millions of Argentines in the world happy. So we cannot give up on that dream. I have won all the most important tournaments but I am ambitious to the end. I would not like to retire from active football without being a world champion with my country.”

Messi’s legacy as the greatest player to have ever played the game might depend on how he plays for the rest of this World Cup. He has found little joy so far in Russia, missing a penalty against Iceland before he was unable to influence the match completely in Argentina’s 3-0 defeat against Croatia.

Argentina captain Lionel Messi did not find his peak form at the Russia World Cup as the Albiceleste crashed at the Round of 16 stage of the competition following a 4-3 defeat against France.

Kylian Mbappe was the star of the show, bagging two goals and also forcing a penalty from Marcos Rojo. France midfield and defence had kept a sharp eye on Messi all game and the Argentine still managed to provide two assists but did not find his goal-scoring form as Argentina crashed out.

French midfielder Paul Pogba however heaped praise on the genius playmaker despite media’s focus on his failure.

“It’s been more than 10 years since he became the best player in the world,” the Manchester United man said.

“I lost the 2015 Champions League final with Juventus against him and I’m happy to have beaten him today.”

Pogba also said that in the minds of fans, footballers and journalists, Messi will always be there despite there being the possibility that this was probably his last appearance at a World Cup. Pogba wanted Messi to continue to show his magic because players like him make people fall in love with football.

“Players like that, they make you love football,” he said. “I think he’s going to continue to be the best for many years and it’ll always be a pleasure to see him play.

“He must be sad. It could be his last World Cup, but he’ll remain in the heads of each football fan, each journalist, each person in the entire world forever,” he concluded.

Messi, who had retired once from international football before making a return has so far avoided talking to the press following the defeat against France.

Midfielders Lucas Biglia and Javier Mascherano have both announced their retirement following the defeat.

Argentina World Cup captain Lionel Messi and his national side teammates had apparently told coach Jorge Sampaoli after the Croatian match that they no longer trusted the now sacked manager, according to a new book.

Mundial es Historias, a new book from Argentinean journalist Ariel Senosian soon to be released, claimed that a row erupted after they were defeated 3-0 by Croatia in the group stages.

“We do not get what you say. We no longer trust you. We want to have an opinion.” One of the players of the Albiceleste was quoted in the book as saying.

The players demanded that they get to have a say on everything to do with the team. Sampaoli then snapped back asking: “So you are going to put the team together, direct in training, everything?”

“You have asked me ten times which players I wanted in the line-up and which I didn’t, and I never gave you a single name. Tell me, in front of everyone, if I ever gave you any names.” Messi had asked.

After the row, Sampaoli was seen asking Messi, if he should bring on Sergio Agüero during the Nigeria match, which they won 2-1 thanks to a late Marcos Rojo goal to qualify for the knockout stages.

In an interview with Barca TV, the Englishman previewed the match and tipped the Argentine to be the key.

“He is the best player to have ever donned a pair of boots. I still am bewildered by so many of the things he does. It’s almost as if he watches the game of football from above [bird’s eye view] while he is playing at the same time.

“Best dribbler I have ever seen, he is the most imaginative footballer I’ve ever seen. He is one of the most skillful players ever and he is the best passer that the game has ever seen.

“Put all those things together… and you have someone who is clearly not a human being,” Lineker said. “He never rises to provocation, and he is a great example to both the world of football and to every young person who plays the sport.”

Messi struck a hattrick in Barcelona’s match against PSV in matchday 1 of the Champions League this season. Lineker, with his loyalties divided, finished by saying that he expected both clubs to progress to the knockout stages.