Argentina need to sort things out 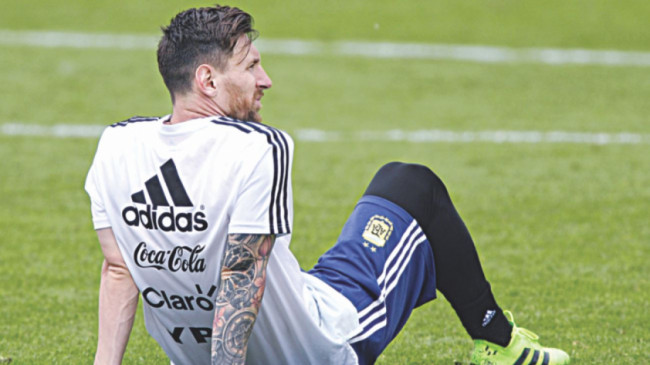 The Spartak Moscow Arena turned into a theatre of dreams for World Cup debutants Iceland when they held two-time champions Argentina to a 1-1 draw. After a pulsating encounter it was Iceland goalkeeper Hannes Halldorsson who stood like a Spartak gladiator-- a 25-meter monument on a vast football in front of Russia’s most successful football club’s home ground – following that monumental penalty save against Lionel Messi.

Messi drove a low left-footer from the spot that Halldorsson judged perfectly and fisted it away, depriving Argentina a winning start. Apart from that crucial second-half save, Halldorsson also denied the Barcelona star in the first half when he parried Messi’s swerving left-footer diving to his right. Messi, desperately looking for a World Cup title after two abortive attempts, got one last chance to win the game late. But his 35-yard free-kick, which was the last shot of the game, bounced off that water-tight Ice Dragon wall.

Before the start of the game the Argentina fans dominated the 45,000-capacity dome with deafening roar. It got extra gear when their living legend Diego Maradona, who was watching the game from the VIP box, appeared briefly in the balcony sporting red sunglasses and joined the chorus. But after match they left silently, leaving a small yet noticeable Iceland fan-group in blue to sink in a result, which was more than a draw for them. And it was not a fluke for a team that made it to the Euro quarterfinals at the expense of England two years ago.

Argentina might have enjoyed the territorial dominance, but it was the Iceland team that looked more menacing when they broke forward. They looked solid while defending, hardly allowing Messi to create any space. They attacked like hounds and created a lot of trouble for a disjointed Argentina defence with a shaky Willy Caballero under the bar.

And apart from an ageless Javier Mascherano, the four men behind him struggled to cope up with a fast counter-attacking Iceland who were very good in the air.

Watching the horror defending of Jorge Sampaoli’s charges, one curious fan aptly quipped that it was defence ‘wearing an unstitched lungi and could be embarrassed any time’. Argentina defence has always been a concern in their qualifying campaign.

They just looked like a one-man team with Angel di Maria painfully short of ideas down the other flank. Messi was heavily marked in the game, which was understandable. They needed more variety in the attack. Argentina will play their next game against Croatia on Thursday. They can ill-afford another draw, a result which may put their World Cup hopes on the line.

Messi had a tough day and specially after his rival for golden boot Cristiano Ronaldo’s hattrick for Portugal in the previous night. Messi led Argentina to a warm-up session 30 minutes before the start of the kick-off.

Interestingly, he took three consecutive shots at goal during training. The first one just missed the mark. The second one was blocked by the goalkeeper. He scored from the rebound, the only difference was that was practice and nobody was blocking his way. Almost identical. But we all know Messi is from a different planet. He can produce magic that others can only envy. Hopefully for the Argentine fans he will come to the party with all his magic against Croatia.

France and Croatia go into Sunday's World Cup final in Moscow with the same starting line-ups as in their semi-final wins over Belgium and England respectively.

Kylian Mbappe and Antoine Griezmann support Olivier Giroud in attack in France's 4-2-3-1 formation, while Ivan Perisic and Ivan Strinic, who had been pre-match injury doubts, have been passed fit for Croatia.

Perisic was the star of Croatia's 2-1 extra-time victory over England at the same Luzhniki Stadium on Wednesday, scoring his country's equaliser and then setting up the winner for Mario Mandzukic.

Croatia are in their first ever final, while France are aiming to win the trophy for the second time, after beating Brazil 3-0 in the final as hosts in 1998.

France beat Belgium 1-0 in the semi-final with a Samuel Umtiti goal in the second half.

Starting line-ups for the World Cup final between France and Croatia at the Luzhniki Stadium in Moscow on Sunday (1500 GMT kick-off):

Fast & Furious 8, the eighth movie of the franchise, is currently being shot at downtown Cleveland in the US.

A video clip of the shooting has recently gone viral in the internet that shows four cars being catapulted out of a multi-storied car park, ending up in a fiery heap below while other cars race through the fire, reports Collider.

Netizens are already thrilled as they ponder over the possible plot and the extent of crazy stunts and street fires waiting for them in the movie that is scheduled to hit the theaters on April 14th, 2017.

The clip was also posted on Reddit, where users ruminated on what within the plot would cause four cars make a leap and hit the ground like that.

However, if you are looking for an unadulterated experience of watching the film, view no further.

Earlier, Fast & Furious 8 has been spotted filming at exotic locations of Iceland and Cuba.

“We’re really pushing to make sure the audience feels like it’s not more of the same,” F Gary told Collider.

“They feel like it’s fresh, they feel like the characters they’ve come to know and love are there, but this is gonna be different, and that’s probably the most I can give you right now.”

Lionel Messi is now back in training with the first-team, though he still has some mobility issues, and is thus unlikely to feature in the Copa del Rey clash against Cultural Leonesa.

The Argentine suffered a fracture on his right arm during Barcelona’s 4-2 victory over Sevilla in La Liga and was subsequently ruled out of El Clasico clash against Real Madrid which Barca then won 5-1. Messi seemed super glad to be back in training as can be seen from the photo that FC Barcelona shared on their official Facebook page.

While Barcelona still played at an impressive level without their chief playmaker, coach Ernesto Valverde wanted Messi back as soon as possible.

"For us, since last week when he got injured, we were probably thinking how we would respond on the pitch," he told a news conference.

"There's only one answer, you have to respond as a team and that's what we've done. The result could've been different but that's the only answer we can give you.

"We're delighted for the team but obviously the sooner he's back the better for us because we miss him. We want him back tomorrow,” the coach said after the 5-1 hammering of Real Madrid.

Messi reportedly only underwent light training today and Barcelona will be hoping that the Argentine is available for the match against Atletico Madrid on November 25. Messi is still unlikely to feature against Inter Milan in the Champions League and also any La Liga matches prior to the Atletico match.

Argentina may have struggled through the group stages but Diego Maradona believes in Argentina and hopes that Lionel Messi still has a chance of winning the World Cup.

Argentina battled hard to win against Nigeria 2-1, which was their first in the tournament, to squeeze into the knockout rounds.

"Yes, of course, it can be," Maradona was quoted as saying by Spanish newspaper Marca to the question whether this could still be Messi's tournament.

"This is just beginning, it's in diapers. Now is when we start playing," the 57-year-old former World Cup winner added.

"No one can retreat any more. The teams have to attack. If not, at most you go to penalties."

"I have a lot of respect for France and Spain will not have an easy time against Russia either. Now is when all the players start their engines. Their dream is to win a World Cup and now they must prove it," the Argentina legend added.

France overwhelmed Croatia 4-2 in the World Cup final at Moscow's Luzhniki stadium on Sunday to lift the trophy for the second time in 20 years.

The French, playing their third World Cup final, were made to sweat initially and were lucky to go ahead when Croatia striker Mario Mandzukic headed an Antoine Griezmann free kick into his own net in the 18th minute, the first own goal in a World Cup final.

Ivan Perisic levelled with a powerful shot 10 minutes later but the Croatia midfielder was then penalised for handball following a VAR review and Griezmann stepped up coolly to convert the 38th-minute penalty and put France 2-1 up.

Croatia fought hard for an hour but gradually ran out of steam after playing extra time in their three previous matches, and goals from Paul Pogba and Kylian Mbappe gave France a three-goal cushion.

Mandzukic pounced on a mistake by France keeper Hugo Lloris to cut the deficit in the 69th minute, making it the highest-scoring final over 90 minutes in 60 years, but Croatia could not find the net again in their first World Cup final.