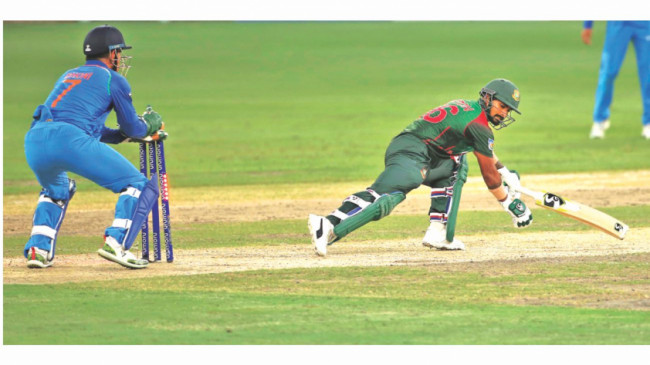 There has been a lot of debate on social media and elsewhere regarding Liton Das's stumping by Mahendra Singh Dhoni in Friday's Asia Cup final. The decision was very close, as multiple angles of the sequence showed, before the third umpire finally ruled in favour of India. Here is what Bangladesh captain Mashrafe Bin Mortaza had to say about this: "It is hard to tell. At one point we felt it was not out. I think the third umpire can say it better. Maybe it will be discussed later."

Rubel Hossain is known for blowing hot and cold in a career spanning over a decade. Prone to err in the death overs, the right-arm pacer with a slinging action perhaps bowled his best ten overs in the one-day international against India in the Asia Cup final on Friday. His figures of 10-2-26-2 was a demonstration of how well he bowled in Dubai. He had Ravindra Jadeja caught in the 48th over, which was his last over, to create that window for a late twist in a pulsating final that Bangladesh lost off the last ball of the game.

Performers, be they on stage, in front of television cameras or on the field of play, sometimes talk about 'love the mess' -- in other words revelling in the scenario when things spin out of control -- in order to survive the chaos. Bangladesh are certainly in a chaotic situation in the UAE in their Asia Cup campaign, and just before today's final against top-ranked India, skipper Mashrafe Bin Mortaza seemed to have started embracing the bedlam.

“In this tournament we surprised ourselves and you folks as well. There were different players at different times in different positions,” Mashrafe laughed as he answered a reporter's question about team composition. “Anyway, it was more to do with being a victim of circumstance. With Shakib [Al Hasan] not there, you might see someone [opening the batting] tomorrow who has never opened. We are prepared for everything and I am also asking you to be prepared.”

The Asia Cup has been a trial by fire -- or at any rate intense Middle Eastern heat -- for Bangladesh. They lost opener and highest run-getter Tamim Iqbal with a left-hand fracture after the first match, had to contend with confusion surrounding the group placements and scheduling that seemed to be a product of organisers favouring India, and then the loss of ace all-rounder Shakib Al Hasan.

While Mashrafe, always an upbeat person, at times cut a forlorn figure in the middle stages of the tournament when they lost abjectly to Afghanistan and India. But then, on Sunday in the three-run win over Afghanistan, things started improving even as they appeared to become more pear-shaped. Opener Imrul Kayes was flown in to bolster a weak opening partnership, but Mashrafe decided to bat him at number six for the first time in his life, and he scored 72.

On Wednesday, after Shakib was ruled out, Bangladesh still managed to win against Pakistan, having to play with a bowler less. Part-time medium pacer and the other opener flown in, Soumya Sarkar, made up for that handicap with a fine bowling performance and took a wicket, shockingly, with a bouncer.

Roles have been redefined and Mashrafe seemed to be revelling in the madness of it all.

Seen from a wide angle, this topsy turvy state has hardly come out of the blue. Tamim suffered the fracture in the 11th ball of the tournament against Sri Lanka. Even though he came back to the dressing room with his left arm in a sling, Mashrafe urged the opener to go out at number 11 to enable Mushfiqur Rahim to score as many runs as possible. Tamim had the gumption to follow the order and played a ball one-handed, contributing to the 137-run win.

That single bit of courage and flexibility seems to have infected the whole squad throughout a tournament of highs and lows.

“Frankly, when Tamim took the field with a broken hand, to me I had won the Asia Cup right then,” Mashrafe said with a smile.

If he can keep embracing the chaos and thinking out of the box, there may actually be more to smile about today.

Mashrafe Bin Mortaza had boldly stated prior the Asia Cup final against India that he was not so cheap that he would judge himself by a trophy.

That trophy has eluded the Tigers once again following India's thrilling last-ball win on Friday in the Asia Cup final at the Dubai International Cricket Stadium.

Even with all the limitations and one setback after another, Mashrafe was so close to achieving the much-desired glory for the country but ultimately, he could not put his hands on the trophy. However, we must echo sentiments of Bangladesh's ODI skipper that there is no way we can judge the brave-hearted cricketer or his brigade by their failure to break the trophy jinx.

Sporting achievements are often measured by numbers and that is precisely why it will be difficult to analyse Mashrafe's true contribution in the region's biggest cricket competition.

"The boys should feel proud," responded the Bangladesh skipper after his team's three-wicket defeat in the final. "I think they did a good job without two key members. Missing Shakib [Al Hasan] and Tamim [Iqbal] was a big blow but I think boys have done a really good job," he continued.

Mashrafe had every reason to praise his charges. But we must thank the brave-hearted Tigers leader for the way he inspired his boys to overcome all the chaos. And it looked like he put the 'fear limits you and your vision' mantra to the ears of his charges.

If it all started by encouraging Tamim Iqbal to return to the crease at the fall of Bangladesh's ninth wicket in the 47th over against Sri Lanka in the opening match to accompany centurion Mushfiqur Rahim -- who almost single-handedly guided the side to a fighting 261 with his highest ODI score of 144 -- then it ended with the startling motion that saw him inspire opener Liton Das from the dressing room by thumping his chest.

Mashrafe effortlessly carried the burden of expectations throughout the tournament.

The young cricketers' failure to meet expectations has become the centre of discussion in recent times but this Asia Cup at least provided some hope thanks to this charismatic leader who tried his best to bring the best out of Liton, Mustafizur Rahman, Mehedi Hasan Miraz, Mohammad Mithun and even a proven performer like Mushfiqur Rahim didn't hesitate to praise the Mash-impact in their performance.

It was actually a bowling effort that Bangladesh can be proud of as they seemed out of the game on numerous occasions. However, the bowlers brought them back into the contention thanks to their never-say-die attitude. And it was no exception in the final battle against India.

There were not many who believed that Bangladesh could take the game to the last ball after they managed only 222 runs despite Liton and Miraz's brilliant 120-run opening stand. Mashrafe however once again proved that he was not a man who would give up on the job before showing any fight and he rightly credited his bowlers for putting up that fight.

"I hope we won a lot of hearts," Mashrafe said.

But a true champion could not stop here and that was why he said: "The positives depend on the individuals. I think losing to India twice was something that I didn't desire. When Shakib and Tamim are back, the team will do well in the future if we can hold on to this spirit."

Yes, it was the spirit that Mashrafe injected most among his charges to win the hearts and in future that spirit will help fulfil their ambitions. Still, when Mashrafe said that "we have lot of work to do" it means a lot for future success.

An already unlucky Asia Cup went from bad to worse for Bangladesh as before the most important match, yesterday's virtual semifinal against Pakistan, trump card Shakib Al Hasan was ruled out of the tournament. That meant that Bangladesh, already without Tamim Iqbal because of a left-hand fracture sustained in the first game, were in crisis mode. However, this crisis could have been avoided and that it was not is the equivalent of a man beneath a window watching a falling safe and hoping that gravity will suddenly change its laws.

Shakib's injury to his left little finger, which saw him return to Dhaka yesterday and likely to fly off for either Melbourne or New York for surgery, was sustained in the tri-series final against Sri Lanka at home on January 27. He was ruled out of the subsequent Test and T20I series and was only brought back in March for the crunch Nidahas Trophy game against Sri Lanka in Colombo.

He then played the three-match T20I series against Afghanistan in June and starred on the full tour of West Indies with the bat. But upon returning from the tour, Shakib expressed a desire to have the surgery as soon as possible.

“I think it [surgery] should be done because I don't want to play without being fully fit. So, if I think along those lines then having surgery before the Asia Cup is normal. Most probably it will take place before the Asia Cup,” said Shakib at the airport on August 9.

However, Bangladesh Cricket Board (BCB) president Nazmul Hassan said on that very day that he could not imagine playing the Asia Cup without Shakib, even though new coach Steve Rhodes was also of the opinion that Shakib should go under the knife before the Asia Cup.

“I said it would be better to do it before the Zimbabwe series,” Hassan said. “The Asia Cup this time is already tough and it will be a psychological disadvantage if Shakib is not there. We will sit with Shakib and discuss everything soon.”

After discussion, Hassan had said it was up to Shakib the BCB boss already having made his preference known perhaps put Shakib in a false position. He still said that he was finding it difficult to bat. And that showed in scores of 0, 17, 32 and 0 in the first four matches of the Asia Cup. Shakib never looked comfortable with bat in hand and the continued exposure of the finger led to him not even being able to grip the bat before the Pakistan match.

“Let's see when I go there -- if things don't look good I might go straight for surgery from there,” Shakib said with a chuckle in an interview with The Daily Star on September 5. It does not seem so funny now.

If the BCB had taken the word of a player of Shakib's calibre and allowed him to do what his body needed, then Bangladesh could have planned for the Asia Cup without Shakib. Instead, at the most important juncture of a tournament, they are basically in a state of emergency. It has to be wondered what psychological effect that has had.

‘Mustafiz was a magician’ – Mash hails fantastic last over

No Tamim and possibly no Mushy too